This wonderful eye opening story about the world of Jorabs (Ethnic Socks) has been written by Tatyana Tadenev. I would like to thank Tatyana very much for sharing this with me and for allowing me to publish it here on Historic Crafts. You can read more about jorabs and see what Tatyana is up to on her blog Kloobok. 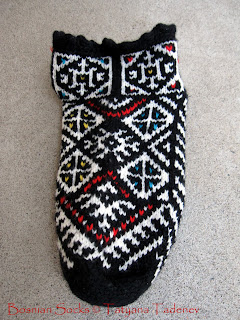 I learned about Jorabs by chance: from the National Geographic gift catalog. It was Christmas time, and I was looking for a nice gift idea for my husband. Leafing through the catalog I saw a picture of incredibly beautiful multicolored socks made in Bosnia. I ordered them and could not wait for my package to arrive.

The socks were knitted in an unusual way: toe-up. Unlike a well-known Western way of knitting them from cuffs down, these were started at the toe with just a few stitches, and continued up with symmetrical increases on both sides. Patterning was not the same all over: the pattern for the sole was much simpler.

Everything about the socks was new and delightful; I wanted to make a pair of my own! Fortunately, a guide was available: Anna Zilboorg’s book “Simply Socks”. Anna visited Turkey and shared with readers her knowledge of local craft. The book offered explanations on how to design and knit your own Turkish-style socks. 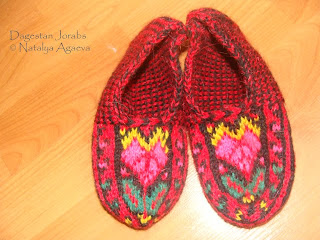 The majority of the socks were knitted using Fair Isle technique with two or more colors. I learned how to knit with two different colors without twisting them a while ago, from the “Two-handed Fair Isle Technique” video . Quite often there are more than two colors involved in jorab design; the two-handed technique is very helpful in keeping various yarns in order.

My Bosnian jorabs were knitted toe-up, but the technique was different from the Turkish toe described in Anna Zilboorg’s book. I wanted to learn more. A friend of mine suggested another source: a book featuring socks from many regions, and various ways of knitting them. Eureka! Priscilla Gibson-Roberts wrote “Ethnic Socks & Stockings:
A Compendium of Eastern Design and Technique”. This book was all I dreamed about: socks from Greece, Bulgaria, Macedonia, and Central Asia to name a few, their construction technique, and helpful knitting strategies. 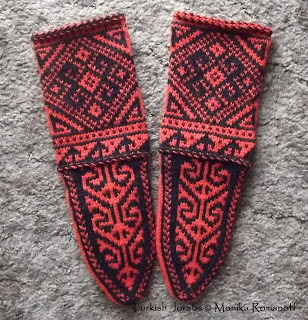 The knitting of jorabs is addictive: while working on one pair you are planning another. There is so much to choose from: regional designs are unique in their color combinations and symbols. Quite often decorative elements were taken from carpets and adopted for jorabs.

I was asked once why the term “jorabs” is used for ethnic footwear from so many different areas and cultures. The answer is perhaps in the word itself. It comes from Arabic جورب (jourab) which has a general meaning of “socks”. Other known variants of the term: “çorap” (Turkish), “čorab” (Macedonian) “charape” (Serbian), “Чорап” (Bulgarian), “Corab” (Azerbaijani), “Čarapa” (Croatian), and “Ҷӯроб” (Tadzhik). All of these words describe a highly decorative, often multi-colored sock knitted from the toe-up.

Since my first encounter with jorabs I knitted a few pairs, and with a friend of mine wrote a short article for Wikipedia. Recently I’ve found an excellent website with many examples of Ethnic socks from Balkan countries. Hopefully, a strong interest to this craft among knitters will result in more publications. Jorabs’ journey will continue.

References:
The images are copyright of Tatyana and her friends - please see individual images for copyright notice and please respect these.
Posted by Argus at 17:12