Portrait of a Craft Historian 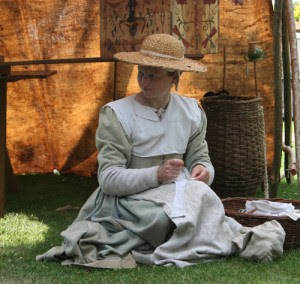 Ruth Goodman is currently known as an Edwardian woman living and working on a farm at Morwellham Quay, in Devon together with fellow Edwardians Alex Langlands and Peter Ginn (shown on BBC 2 recently). Together they worked the farm from autumn 2009 till autumn 2010. They also previously worked together on a Victorian farm at Acton Scott in Shropshire. Together with 5 historians and archaeologists, Ruth also participated in BBC2’s ‘Tales from the Green Valley’ where they explored living on a Tudor farm in the year 1620.
Ruth furthermore does historic consultancy for museums and the media and she does lectures and courses in British social history (learn more about this on her website). Next to all this she also finds time to sew and design replica clothing and she is a member of the Tudor Group.

Eddie: At Historic Crafts we have a rather wide definition of crafts from brewing beer to machine knitting. How would you define a craft?

Ruth: I would describe a lot of my activities as 'craft'. Cookery for example seems to me an almost text book example of traditional craft work. Housework too is a living craft tradition combining skills and knowledge that are handed down from practitioner to practitioner, involving the understanding and manipulation of a range of materials in a practical and hands-on fashion. Such skills do not appear spontaneously fully formed but develop over a lifetime. That these skills have not been lost but are the stock in trade of a large number of people is something to be celebrated.

Eddie: What would you say was your main craft? Is it sewing?

Ruth: If by 'main craft' you mean that which I have most often been paid for, then 'sewing' comes high on the list. I research and make replicas of historic clothing. At times in my life this has formed my main income, although at present it has no more prominence than several other activities.
Rather than producing for a mass market my craft is a bespoke one and aimed at museums, theatre and individuals who are looking for something beyond 'dressing up'.
For me it is not enough to produce clothing that 'looks sort of right' I am interested in following the techniques and thinking of the historical period. Craft skills develop and change over time, they are not static. Just because a thing was done in the 1920s does not mean that it was done that way in the 1820s or that the method of the 1820s was unchanged from that of the 1720s. If I were to employ the craft techniques of the 1920s to make a garment of the 1720s the finished piece would hang on the body completely differently, it would be tight in the wrong places and loose and floppy where it should be snug and structured. Likewise if I were to employ Tudor tailoring methods to an Edwardian garment the result would be both inaccurate and awkward.
Much of the skill in re-creating historical clothing therefore is working out the relevant methods and techniques, having a range of skills at your fingertips and knowing when and where to employ them. As with any craft this is an ongoing journey of exploration and refinement.
I find the research and the practise equally absorbing. Making garments raises whole hosts of questions that sends me back to the research and the research makes me itch to try things out. It really is only by physically doing something that you can get any depth of understanding of the process, whilst just banging out the same old thing without any sense of moving deeper into understanding it and striving for perfection would bore me. 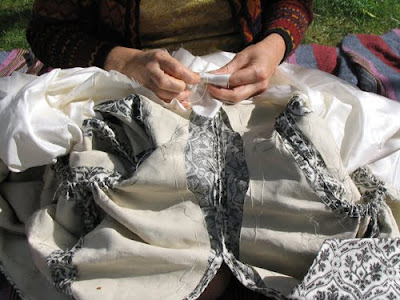 Eddie: Making historic clothing seems to take up quite a bit of your time, where do you get the materials? I find it very difficult to find things like wool and linen.

Ruth: Finding good materials is of course rather tricky no matter which historic period you are trying to work within. However this scarcity means that you have to get to know and work with a whole range of other crafts people which is always a real joy. Weaver, dyers, spinners, printers and fullers, button makers, braid makers, leather workers, bronze casters, tin smiths, gilders and even wood turners fill my contacts page in the address book. I need to call upon all their skills to produce one outfit or another. I learn so much collaborating with people on these projects, knowledge which feeds back into my own craft work.
I also have to say that I truly enjoy the company of crafts people - I find that people who make things with care and commitment, whether that be a strawberry roulade or the knife to cut it, are so much more interesting and enjoyable company than those who simply consume. There is something about the process of making that makes us more fully human.

Eddie: How authentic are the methods you use when making clothes? Do you sit and sew everything by hand or does it go through the sewing machine?

Ruth: Having said all that earlier it should come as no surprise that I use the most authentic methods possible when I am making historical garments. If the garment is pre 1860 I will of course entirely hand sew it, later on in History certain parts were hand sewn and certain parts machined – I try to follow the original method in all cases.

Eddie: You try many different crafts through your work but are there any you do at home for yourself - just for the pure enjoyment of it?

Ruth: Knitting and straw plaiting and rag rugs. Oh and net braiding.
The knitting arose from a need to produce authentic hand knitted stockings for the Tudor period. There are a number of makers of coarsely knitted stockings to a broadly mid 17th century pattern, but the surviving earlier ones are finely, densely knitted with none of the later refinements. Having seen the real thing in several museums I just had to learn to knit so that I could make some.
The straw plaiting came from a fifteen minute lesson that I was lucky enough to receive whilst filming the Victorian Farm series. It is addictive, and I have made myself several hats since then.
Rag rugs popped up during the Edwardian Farm series. It’s extremely easy.
Net braiding is something which a friend taught me a few years ago in a Tudor context and was a skill that I was able to press into service for a spot of salmon fishing on the Edwardian farm. I usually braid very fine silk hair nets for Tudor hairdressing.
Naturally you can’t become an expert in everything and I have to say that all four of these are simply something that I dabble a bit in rather than class myself as a craftsperson in these areas. 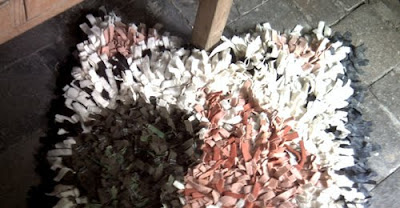 Eddie: Do you think that crafts should play an important role in today's culture and why?

Ruth: I find it hard to imagine life without craft work, both personally and as a society.
The urge to make things and make them well seems to be built in; every child I have ever met enjoys the process. Given the chance to make a real thing kids settle down, become focused and relaxed. The same goes for adults. I wonder if the problem with modern life is that people don’t feel confident that they can make stuff. Modern life can be short on the opportunity to spend time with someone learning a skill and short of support for those who try. The constant drive for ‘cheap’ and ‘convenient’ can be disheartening.
Yet learning a set of skills, practising and perfecting them is deeply useful in modern life. Whilst some of us may wish to remain in an historical tradition producing items that are no longer in mainstream use, it seems to me that the skills, knowledge, understanding and approach form a springboard for a vast array of new projects and developments. Being a craftsperson gives you a mastery of materials and tools and a confidence in working with them. To use an example from the craft area that I am personally most familiar with, ancient hand techniques of stitchery and approaches to cloth cutting allow designers such as Vivienne Westwood not only to run successful modern clothing companies but to move textile technology onwards.
The traditional crafts, making traditional products in traditional ways, provide a ‘genetic seed bank’ for the future.

Eddie: How do you think we can keep traditional crafts alive?

Ruth: Actually I think traditional crafts are quite resilient. I have been reading books about the ‘last practitioner’ for thirty years. New craftspeople continue to emerge. New – if small – markets seem to pop up. Thirty years ago who would have believed that there was a future in charcoal burning? Not that any of us should be complacent, if we all keep banging on about what a joy these crafts are to do and how lovely the produce is, how useful and pleasurable they can be to own, perhaps we can give more people the confidence to try and to buy.

Eddie: Where does your interest in history come from?

Ruth: Not the foggiest – just sort of grew out of childhood excursions with my family and a shelf of really good books at home. My mother is also quite a skilled craftswoman – that helped.

Eddie: When did you begin to get interested in the crafty / experimental side of history?

Ruth: I married a man who had been re-enacting battles since he was 12. Now battles don’t interest me one jot, but once you get started looking into past lives how can you resist finding out what people ate for dinner, and by the way what does it really taste like?

Eddie: Do you use the things you learn in the TV series you have worked on in your daily home life?

Ruth: Of course. I stopped using detergent in my washing machine 6 or 7 years ago – the water and the agitation are all you need in 99% of washes. That was something I learnt doing Tudor laundry. We also eat much better after all that practise at historical cookery. My housework is much more eco-friendly than it used to be and our garden fence is the result of learning to work with hazel.

Eddie: What do you gain as a historian from living as a Tudor or Victorian person that you don't get from reading primary sources?

Ruth: Reading and studying, whilst vitally important can only give you so much. As soon as you try it out you realise how much you don’t know and that is a valuable lesson in its own right.
I gain an insight into what questions I should be asking, knowledge of where the gaps are in the historical record and of course an empathy with the trials and tribulations of a practical life.

The images in this post are copyright of Ruth Goodman who has kindly allowed us use of them for this interview. If you wish to use the images please request permission from Ruth.