Portrait of a Woodworker

Robin Wood is a wood worker who specialises in the use of local timbers and traditional techniques. He combines the practicalities of turning wood bowls and carving spoons with an interest in the history of the items, culminating in the book “The Wooden Bowl”. Robin won ‘Artisan of the Year’ in 2009 and will be judging the ‘Balvenie Masters of Craft awards’ this year. On top of all this Robin is the chairman of the Heritage Crafts Association formed in 2009. The HCA are having their first annual spring conference on the 19th March 2011 at the V&A in London and because of this I decided it would be great to ask Robin a couple of questions about the nature of the HCA and his own craft, woodworking.

Eddie: How did you get into woodworking?

Robin: I was working for the National Trust in conservation forestry. We were reintroducing traditional forestry practices to a 1000 acre medieval forest but the products of those practices no longer had a good market. Originally the woods were cut regularly producing small diameter wood and timber which was used locally by craftspeople and for fuel. Today the market is for large diameter trees, which are transported long distances to be cut up in big sawmills. I started researching the traditional wood crafts which used the small diameter raw material, I experimented with various crafts as a hobby and as a way of learning more about the properties of the trees I was cutting.

Robin working with the lathe, courtesy and copyright of Robin Wood

Eddie: What techniques would you usually use in your woodwork?

Robin: Primarily I use hand tools. The bulk of my work is turning functional wooden bowls on a foot-powered lathe. I also carve spoons with axes and knives and teach the skills of carving bowls and spoons with hand tools.

Eddie: How do you source the timber you use?

Robin: I source all my timber locally. Most comes from local tree surgeons and is wood that otherwise would not have a commercial market. Recently, I have been using a lot of willow cut by the environment agency from the banks of the river Don in Sheffield as part of floor protection work. I also use a lot of beech, sycamore and alder. Folk often ask which of these woods I prefer as if all sycamore trees and all beech trees are identical. When you work with hand tools and start with the whole tree you realise how variable timber is. Many woodworkers miss out on this because the whole timber processing industry is trying to produce a homogeneous product.

Eddie: What kind of woodwork do you prefer to do at the moment?

I love all sorts of traditional hand woodwork, I tend to stay with my turning and carving because it is only through thousands of hours of repetition that we truly master skills. I enjoy trying different techniques for fun too though and am continually experimenting.

Eddie: Where do you get your inspiration from?

I am inspired by the generations of woodworkers long gone. I read books like Edlin's "Woodland crafts of Britain" and see photos of traditional craftspeople with huge piles of produce. Most people today only play at crafts and make money from teaching or demonstrating. I always wanted to make my living primarily from producing. I felt that if I could make things as fast as the old traditional woodworkers clearly did then it could be sustainable and viable today. It was, and it is only more recently that I have been happy to also teach. I guess the prime inspiration for my bowl turning was seeing the work of George Lailey. He was the last pole lathe bowl turner in the UK and when he died in 1958 his lathe and tools went to the Museum of English Rural Life. I saw it and it felt like a great shame that there was no one practising the craft, I set about learning the technique, first by learning to forge my own turning tools. After 15 years of full time working and demonstrating the craft I am pleased to say there are now a number of folk around the country and the world that are now practising this once lost craft. I study a lot of crafts in museums, I spent 10 years visiting museums across the UK and Europe looking at medieval wooden bowls from excavations, they are a continual source of inspiration. 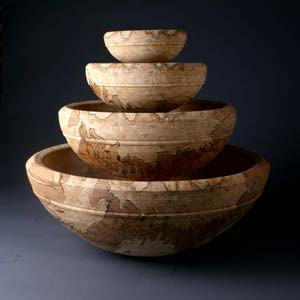 Eddie: Can you tell me a bit about Japanese woodwork?

Robin: I have many friends around the world who share my love of traditional woodwork techniques. One of these Hannes Schnelle is a talented German carpenter who after his rigorous traditional apprenticeship became a journeyman and was apprenticed a second time to a master temple carpenter in Japan. That master Sugimura-San set up the Kesurokai organisation dedicated to sharing and passing traditional skills on to the next generation. In 2005 and 2007 Hannes organised meetings in Germany where the Japanese master carpenters came and worked alongside invited traditional woodworkers from across Europe. In 2010 we made the return journey and visited Japan and worked for 2 weeks alongside the Japanese carpenters building two buildings, a traditional European timber frame and a Japanese tea house. The tools and techniques are remarkably different. Take an apparently simple process like shaping a round tree into a square timber with an axe. I am familiar with a variety of European and North American tools and techniques but they are all basically variations on a theme. The Japanese tools and techniques are totally different and work astonishingly well. I came away with a particular love of their axes (ono) and adzes (chouna) 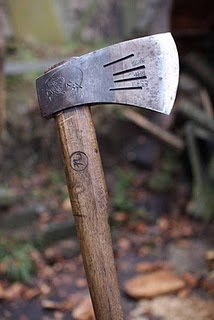 Eddie: How did you get involved with Heritage Crafts Association?

Robin: I had for many years been frustrated at the lack of support for traditional crafts in the UK. It felt like we were somehow not valued as much as my friends who worked with contemporary innovative crafts. I spent many years lobbying either for the Crafts Council to promote traditional crafts alongside modern artistic crafts or for a new "vernacular crafts council" to be formed. Eventually in 2009 with a group of friends we formed the Heritage Crafts Association to promote and preserve traditional crafts as part of our heritage.

Eddie: Is there or should there be in your view a divide between traditional and modern crafts?

Robin: In an ideal world there would be no split between traditional and modern crafts or the applied and fine arts, or craft and industrial production. All these things are part of a continuum of making things, and each practice can and should inform the other. In practice in the UK and much of the western world there is a split, the fine arts were elevated above the applied arts in the 18th century and contemporary innovative craft has over the last 30 years striven to attain fine art status. Traditional craft has been left disenfranchised not recognised or supported by either arts or heritage organisations. Internationally that position is now changing with traditional craft recognised as living heritage, though the UK is still lagging behind.


Eddie: So what is the next step for the HCA?

Robin: Well we have a great conference coming up at the V&A on March 19th with some inspirational speakers. Anyone who supports our aims can support us by joining our friends scheme, following us on Facebook or twitter and helping promote our work by telling friends about what we are doing. Lots more information on the HCA website www.heritagecrafts.org.uk

Thank you to Robin Wood for allowing us to use images from his blog in this interview. If you wish to re-use these images please contact Robin for permission.