Review: Textiles of the Islamic World 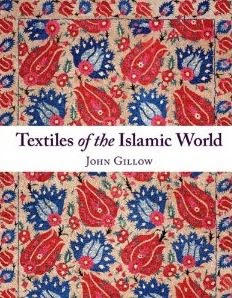 Textiles of the Islamic World
by John Gillow, 2010
Thames & Hudson

This book seems to mark the culmination of a personal journey for John. As a schoolboy in the 1970’s he first came across the rich heritage of Muslim textiles in Istanbul. Now 40 years later, he makes a living of buying and selling textiles from across the world and in doing so he is also keenly interested in the same textiles, their prominence and their history.
John has written several books introduction us to textiles across the world (see my earlier review of African Textiles) and has now returned to the place where this fascination began, the Islamic World.
Islamic textiles are defined by John as textiles made or used by those of Islamic faith.
This brings him from Morocco to China, Russia to Cameroon. Islamic textiles can be identified as displaying ‘aniconic art’, meaning an avoidance of human and animal forms but with a wide use of abstract designs, calligraphy, plant life and geometric forms instead.
John gives a short history of the Islamic World and its textiles before taking us through a fascinating journey region by region to explore the material at hand. In each region he looks at the techniques or the people and has a section about the present. Each part of the book is wonderfully illustrated with images of the textiles along with images of the people who wore them.
This is another book that I can highly recommend both to the person wishing to learn more about this subject, but also for anyone looking for inspiration in their own work. I for one feel inspired to try and weave some of these intriguing motifs.