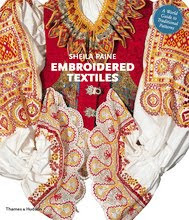 This amazing book is a true world guide to the tradition of embroidered patterns and motifs. Sheila begins by making clear the function of embroidery as she sees it.
In the West, embroidery is often seen as the pastime of idle ladies. However, Sheila’s approach is to liken embroidery to tattooing rather than other textile crafts such as weaving, felting or knitting.
Together with this book we can explore the symbolism embodied in embroidery patterns and their association with religion, rituals and magic. Unlike Western commercially designed kits, most embroidery is difficult to place in time as motifs do not go in and out of fashion in the same way.
However, they can be identified by region and Sheila takes us through the special characteristics of embroidery in each region of the world from Scandinavia to the Far East.
The following chapters cover; “the decorative power of cult”, “religion and its patterns” and “the magical source of protection”. Each chapter is spiced up with a mixture of images of embroidery and photos of people wearing the embroidered pieces.
Sheila puts a lot of weight on symbolism and of embroidery as a way of expressing this symbolism. I especially found the concept of embroidery as protection against evil spirits very interesting reading. As such embroidery has had and still has in some cases, a special place in many of life’s rituals from marriage to mourning.
I think this book will be of interest to people with a more academic interest in embroidery, but also to anyone seeking inspiration for their next project.