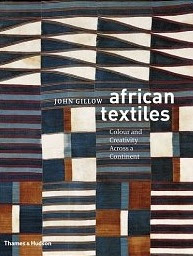 African Textiles - Colour and Creativity Across a Continent
by John Gillow, 2009
Thames & Hudson

This book aims to be an illustrated general survey of textiles of the whole African continent. The chapters divide Africa up, region by region, to look closer at each local weaving, dyeing and embroidery tradition.
Gillow examines the history of the textile tradition across the continent as well as comments on the current state of it. One valid point he makes is that while selling crafted items to tourists or through export is a great way to keep these crafts alive, there is still a need for a strong local demand in order to ensure that a high standard is maintained.
I have learned many new things from this book. Among others, the West African concept of strip-weaving which I must admit I had never heard of before. This is a technique of weaving narrow bands of fabric on a double-heddle loom, which are then sewn together selvedge to selvedge to create a large rectangular wrap.
Another technique I have discovered through this book is stitched resist dyeing, where you fold a piece of cloth and use raffia thread to embroider a pattern. The cloth is then dyed and when the thread is removed you are left with a beautiful regular patterned cloth.
This book has also allowed me to learn more about the bead-work of Southern Africa. A type of decoration that has fascinated me from a very early age. It is often used to make belts, necklaces and aprons to go with the customary skin clothing or just on its own. The beads themselves were of European or Indian manufacture and were introduced by traders and Christian missionaries. Nevertheless, the people of Southern Africa have made a unique technique and style of their own out of it.
I think this book is of equal interest to those who want an overview of African Textiles as well as those who are looking for new inspiration in their own craft-work. I for one have discovered new techniques that I wish to experiment with.
Posted by Unknown at 01:42